Filed under: Reviews by Dàibhidh

Santa can’t be guaranteed to call at Taigh Dhàibhidh (ma’ hoose) these days, so I bought myself a wee pre-Christmas prezzie this week to ensure that I took ownership of something new over the festive period; Sneaky Freaky Creeky – A Scottish Kayaking Film.

It might not as polished as the pro-filmed HD videos being churned out of the USA by the likes of Bombflow or Rider of the Year, the weather might not be quite so warm and sunny, the sun tans may be few and far between and the accents may not sound quite so exotic (or rediculous, depending on which way you look at it), but it’s gritty, high-adrenaline, warts-and-all, top-drawer Scottish paddling at its best! 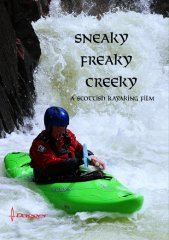 Staring the epic Dave Biggin (Falls of Clyde fame), along with Thom Brown, Ed Smith (the dude from Canoe & Kayak Magazine), Callum Anderson, Rich Waterworth, Neil Robinson and friends, the film constitutes a non-stop 30min tour of some of the best white water that Scotland has to offer; including the rivers Etive, Orchy, Nevis, Falloch and many more…even the WigWam Burn (or Allt Uachdar Thìre to give it its proper Gaelic name) near Crianlarich!

There are some great drops, fantastic lines and one or two classic beat-downs. Any Scottish boater who watches the film is bound to find themselves glued to the screen, shouting: been there, done that, lost my t-shirt there, swum that, not done that, NEVER doing that…and probably a few other unrepeatables!

It may be filmed close to home, where peaty water rules the roost and the sparkling blue waters of the Alps and continental America are but a day dream, but that doesn’t hold it back for one moment; indeed it makes it ever more special. The film is full of wee gems, contains some outstanding footage, some (until now) best-kept secrets and a few epic drops on less-paddled sections of water to whet (or indeed ‘wet’) your whistle.

While it’d be nice to see the lads get some money behind them, along with a good film crew, and create a masterpiece of white water cinematography which sells Scottish paddling to the world (hint, hint Dagger, Visit Scotland etc.), this is an excellent piece of work and, without a doubt, will be inspirational to many…now you’ve watched it, get out there and do it!

Get yourself a copy of Sneaky Freaky Creeky here: http://www.wheresthewater.com/sneaky-freaky-creeky-film