Posted on October 29, 2011 in Articles by Dàibhidh

Ok, just a quick post; just spotted that the dam on the White Salmon River in the US has now gone…quite a spectacle!

Posted on October 12, 2011 in Articles by Dàibhidh

Ok, now this post doesn’t relate to Scottish white water, but it’s a great story so I thought I’d share it…

After many decades of holding back the waters, Condit Dam in the USA will be blow up in an effort to restore the river to its original state. Word on the street is that it’ll reveal some great white water; and for those with big’uns, no doubt some epic, albeit short-lived, water immediately after the TNT goes off!

It’s not often dams are taken down, so it’ll be interesting to see what state the river is in and what fun it holds for paddlers, as well as the salmon who’ll no doubt also be keen to get back up into the upper reaches!

Now, I’m broadly a supporter of renewable energy (although I know that it can sit a little uncomfortably with the sport at times) and I believe that as a society we do have to move away from our addiction to dirty or finite fuels.

So, while dams and weirs need to be accommodated alongside paddlers’ interests, with hits taken on unpopular stretches on what where possible, sometimes good paddling rivers are lost to the green revolution; thus it’s nice to see something being given back for a change.

Anyhow, soapbox removed…check here for some videos etc. on this exciting event: 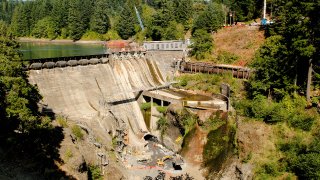