KayakScotland.net is mainly a blog of kayaking activities in the Highlands of Scotland, but it also includes some river guides, equipment reviews and other paddlesport-related content. Trips reviews, photos and articles are updated fairly regularly, so please bookmark the site and return soon to see what's new!

Posted on February 01, 2014 in Announcements by Dàibhidh

Folks, you’ll note that there haven’t been any updates to KayakScotland.net for many months. The reason for this is that I picked up a pretty nasty injury following an evening play boating on the River Garry back in June 2013.

While the docs don’t know exactly how I did it, and it might have nothing to do with kayaking, I somehow managed to tear the membrane (the ‘dura’) that holds in the cranial-spinal fluid (CSF). This fluid is what keeps the brain cushioned and if it leaks, it’s bad news. The leak has resulted in debilitating daily headaches (described by some as migraine on steroids – seriously, they’re insanely painful), constant blurred vision, ear pressure, tinnitus, pressure in my head like it was imploding and a whole host of other symptoms.

I wouldn’t wish this on anybody, so please do take care when you’re paddling, lifting, stretching or doing anything involving valsalva maneuvers. It can be cause by sudden twists under pressure (like whiplash movements in a stopper) or straining when lifting (watch out manual handling). It’s even been done swinging a golf club or straining on the toilet! It’s rare, yes, but not as uncommon as you might think. Mainly women get it following epidurals, but because the source of the leak is known, it’s normally easy enough to fix for most folk.

As I’ve found, it’s complex condition, there is very little known about it and very few specialists in Scotland (or the UK); it will take a long time to recover from fully. The main characteristic that differentiates it from so many other ‘headache’ conditions is that the symptoms disappear, or improve significantly, when you lie down, but increase significantly when you sit or stand.

CSF Leaks are not understood by many neurologists, let alone normal doctors, so if any of fellow paddlers ever gets severe headaches that disappear when you lie down, then reoccur when you stand again, go to A&E and insist that they check you for a CSF Leak and Intracranial Hypotension. It can be easier to find the leak the earlier they look. Sadly for me, it took almost three months for them to cotton on to what was going on and the leak had become undetectable (it’s probably begun to heal, but taking a LONG time).

I will not be the only paddler to have been hit with this life-changing condition and I won’t be the last, so here’s a wee bit of blurb about it all: http://en.wikipedia.org/wiki/Spontaneous_cerebrospinal_fluid_leak

And here’s a forum where anyone that’s unlucky enough to get this can find help and support: http://www.csfleak.org

Anyhow, I hope to be back kayaking one day, but I cannot say when. So, for now, please enjoy reading about my paddling exploits of old, and hopefully one day I’ll be able to update this blog once more…happy paddling…

Posted on January 03, 2013 in Trip Reports by Dàibhidh 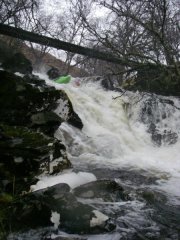 Posted on December 03, 2012 in Announcements by Dàibhidh

I did the training on Saturday and the assessment on Sunday; both on an extremely cold and icy Middle Findhorn.

While the nerves were shaking, each of my sessions went well and I headed home wondering what to do next…BCU 5 Star Leader me thinks!

Well done too to Iain from Inverness Canoe Club who was also one of the successful candidates and braved the wintry conditions with me.